Almost all of this trip so far has gone right. The planning, the decisions, the itinerary, it has all gone well and we would change very little about what we have done.

So this makes it all the more extraordinary that we end the trip with a very strange change to the plan.

We decided (or did I decide…) to leave the Isle of Holbox and spend 3 days in Cancun at the end of our Mexico experience.

What prompted this madness? Holbox was indeed ‘paraiso’ (paradise) with endless sunsets, the warmest turquoise water in the world, sandy lanes and a strong imperative to be and act ‘tranquillo’.

It was also very hot, full of mozzies and, well, a bit claustrophobic. I figured we could spend 3 days in a clean hotel in Cancun and pool and get ourselves ready for the 3rd chapter of our trip.

I’ve already described it as Las Vegas on this blog, and the comparison is apt. A town created solely for tourism; in Vegas it was the mafia strolling into the desert and creating a monster; in Cancun it was the central planners who turned a fishing village into a city of 2 million and 1000 hotels in 40 years. The buildings are very large white boxes with a logo slapped on the top. Both have pyramid hotels trying to break the norm. Westin have two of these large white boxes – one was obviously not enough. From our experience they specialise in poor service and the extraction of money from wallets, attracting huge numbers of tourists seeking sun and fun. The restaurants in both towns are massive ‘concept and themed’ places with wine cellars aimed at the c-suite credit card. Both cities are devoid of taste and charm, both roast in the sun, they are fast-growing and hugely important tax contributors to their host states and countries.

To what extent are they outlets for money laundering? We do not know, but it would be little surprise if the Cancun ecosystem was used to launder the Mexican drug cartels’ cash. It would also explain why the city is – so far – very safe for tourists.

But, as with our first day in Tulum, when you find a place doesn’t work you have to change your plans and your attitude. The solution is easy: day trips!

Mixed success here. We visit this island which is 20 minutes from Cancun and apparently has none of the Sargasso seaweed that covers our hotel’s beach. The island is meant to be lovely with one of the best beaches in Mexico. Sadly, 1000’s of people have had the same idea, and we become cattle herded through the queuing points for the ferry.

However, these are not American tourists, these are Mexican holiday makers. It is the core two week block of summer holidays and Cancun overflows with large groups of Mexican families. To their credit, we hear none of the “Nathan, will you STOP THAT NOW” which you would get from British families. We see only love and laughter and kinship. We see no crossed words or silent tables and the stereotype of the Mexicans being very family-oriented seems accurate.

This is not Isla Mujeres, it is Playa Tortugas but it shows the volume of people on holibobs here

After some wrong turns and arguments of our own, we end up on Playa Norte, which has perhaps the best water for swimming in the world. It is turquoise, shallow, very warm but cooler than Holbox so you feel slightly refreshed for going in. There are ~500 people in the water and countless boats have cruised across from Cancun. Think Formentera for those of you who know Ibiza. We spend the afternoon swimming and reading and sweating and eating ice creams. Annoyingly we take no photos.

We head back to the mainland and out for dinner. The highlight is a friendly crocodile which snuggles up to the pontoon of our restaurant. There are meant to be 2000 crocs in the lagoon, which is a large lake separating the ‘hotel zone’ from the main city of Cancun. 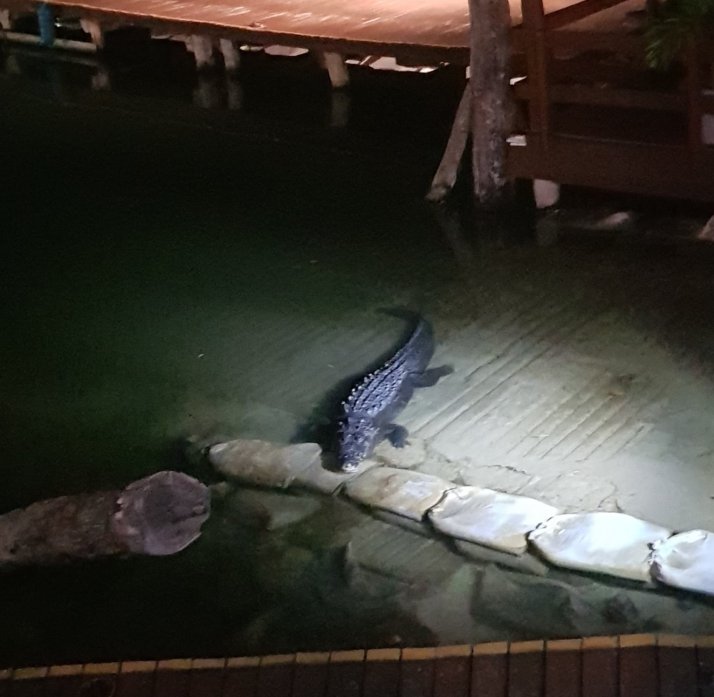 Dinner companion – Cesca put the while restaurant on CROCODILE ALERT