In the book The Four (a polemic on how powerful and evil Google, Facebook, Amazon and Apple are) there is a line about business strategy, and how to identify your core point of difference. It is almost a throw-away line but it holds so much truth: be very good at something which is very difficult.

Through this lens my future is clear: spend a life walking uphill.

It is one thing I love to do which most people hate, and for this reason when I heard about the Grouse Grind I was like a kid at Christmas.

Grouse Mountain is a large hill just north of Vancouver and it is the de facto viewing platform for the city. Apparently you can ski there in the winter and there is an arms race of things to do on the mountain (including several cafes, a full on outdoors shop and a five star restaurant) and the cable car up is just the start.

The Grouse Grind is a 2.9km hike which climbs 850 metres. It is a ‘Grind’ as that intensity of altitude gain in 2.9km is unusual and not for the weak of hips or heart. It is one of the few hikes with large WARNINGS as you start, along the lines of: “You think you’re fit, but, honestly, this is tough so perhaps you should turn around a do normal little hike.”

The Grind has become a rite of passage and a bona fide tourist activity for locals and foreigners: do it and then boast about your time. You can even buy a pass for $25 which allows you to scan yourself in at the bottom and top for an official time and the times are posted on a digital leaderboard in the cafes at the top of the mountain.

I kicked the family awake early one morning and before they had chance to protest we were at the foot of Grouse Mountain. I gave them a kiss as they made for the cable car and I headed off.

Walking uphill is inherently pointless and for some of us, inherently satisfying. Most of what we do is pointless so the aim is to seek out joy, hold onto it and repeat where you can. Going quickly up steep natural stairs of rock and wood is pain for some and joyful for others. Pushing your body to the limit with the reward of a significant view is a pleasure.

I didn’t make the beginners mistake of starting too quickly. Even so, within 10 minutes I could feel my heart going over 120 and my glutes were struggling. 2/3 of the other hikers were women and not all of them under 30. Quite a few couples were on the hike having an active weekend together. Nobody was talking – not enough oxygen in the lungs. The Grind is too steep to stop and nobody is sitting down for a chat. You are told not to picnic in a very passive aggressive Canadian way (“This is not that sort of hike”) and it is so narrow that it is hard to overtake.

Being pathetically competitive and in denial of my middle age, I made a vow not to be overtaken and somehow kept to it. We were in the thick of the trees and in the shade. I fell in line with a guy going at a rate of knots from 25% of the route to 75%. The last quarter is the easiest and I felt fine at the top. 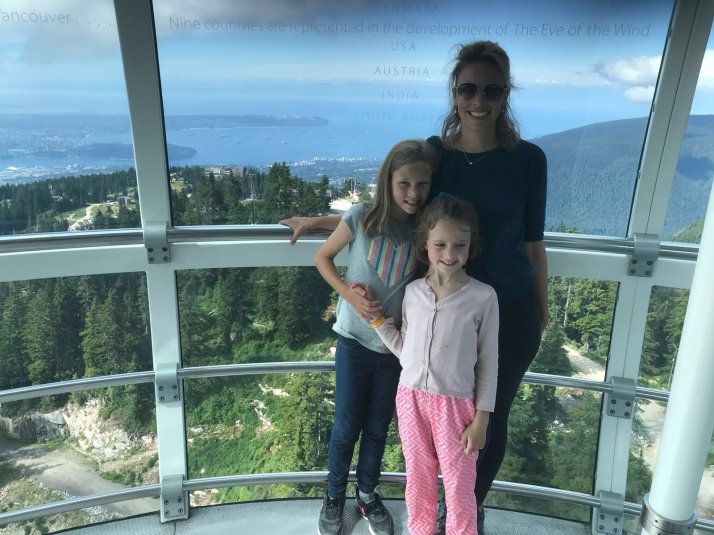 Luce and the girls had gone off to see some bears in captivity and on a super-tourist mega cable car up the mountain, so I had an hour to re-caffeinate and soak up the view. Only Table Mountain in Cape Town offers such an immediate view above a city in my experience.

Table Mountain is a good comparison – I’ve tried to find details about the Platterklip walk up the face of the mountain and I think that it starts at ~400m above sea level and climbs 650 metres to get to the top which is 1050 metres. Platterklip has no shade and the strong South African sun makes it difficult.

For the record… the Grouse Grind is a very steep hike with no let up. 850 meters of climbing will be a lot for most people. Lola could do it but it would take a while. Cesca would have hated it. If you’re into gaining height then I recommend it; otherwise take the cable car as the view is amazing and very worthwhile.